Recognizing the Signs and Symptoms of Diabetes 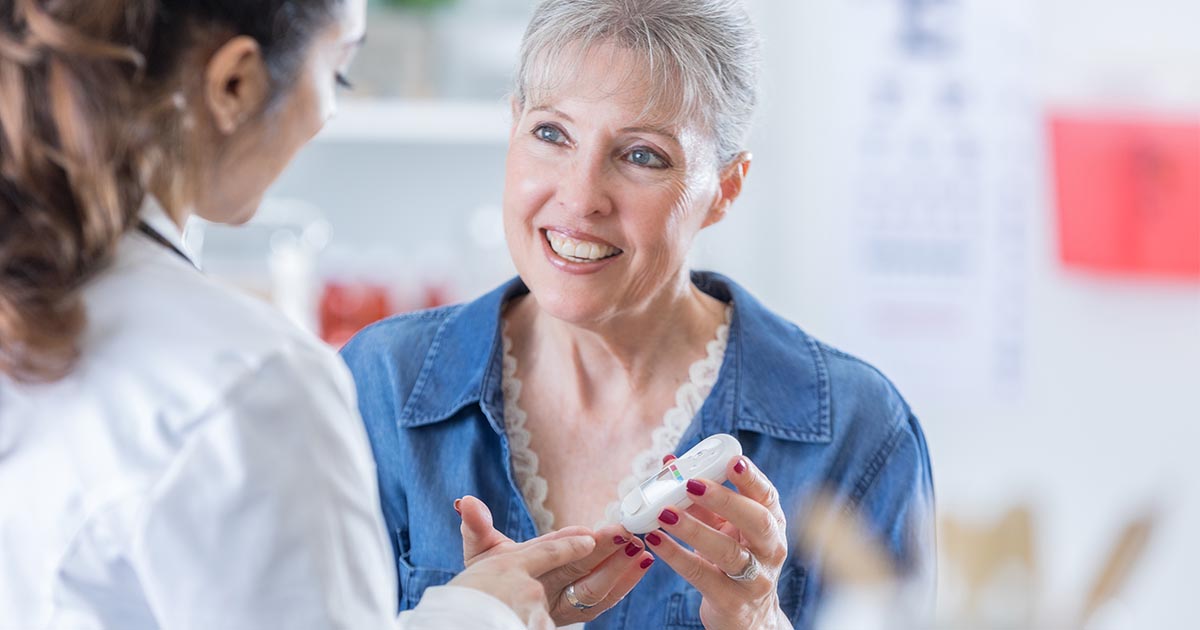 Diabetes is often called a “silent” disease because there are many symptoms, but they don't typically appear until blood sugar levels are grossly elevated. Often, when the disease could initially be diagnosed, there are rarely any symptoms. It's important to understand and spot diabetes symptoms so you can begin treatment as soon as possible.

As a healthcare provider, when I say subjective, I mean that we have to take it for the patient’s word. So, if the patient says, “Well, I haven’t had any symptoms until three weeks ago!” that is what I have to believe – because every person is different.

There are several ways that we can obtain a diabetes diagnosis, some of which are utilized more frequently than others.

The four options for diabetes diagnosis include:

Sometimes, a diagnosis of diabetes is obtained as a result of the patient going to their physician or emergency department due to symptoms that are suspicious of diabetes. At that time, one of these diagnostic tests may be performed.

At other times, diagnostic testing is performed as a result of routine screening, especially in the absence of symptoms.

However, testing is done earlier in individuals who are overweight or obese, or who have the following risk factors:

Testing for diabetes in children is not routine. However, there are guidelines in place if a child is overweight and two or more of the following specific risk factors:

Which almost brings us to the symptoms of diabetes. But first, it is important to understand how insulin works in the body – because when your body is not utilizing insulin correctly, your glucose levels skyrocket; the symptomology may make a bit more sense.

The Role of Insulin and Glucose

First of all, it is important to understand that insulin is a hormone. The pancreas produces it in response to an elevation of blood sugar levels (for example, when glucose is consumed or when the liver produces glucose).

When things are working as they should, the pancreas secretes insulin into the bloodstream in response to the elevation of blood sugar. It secretes the “right” amount, and this perfect amount allows the sugar (the glucose) to enter the red blood cells. The cells then transport the glucose where energy is needed (for example, the lungs, the brain, the muscles). This action lowers the blood sugar level.

When you have diabetes, your body may not be producing enough insulin, or you may be insulin resistant (or both!) and this “perfect dance” isn’t happening as it should. This causes elevated blood sugar levels – and eventually if left untreated, the symptoms of diabetes develop.

You May Also Like:6 Strategies for Coping With Diabetes Foot Pain
Related Search Topics (Ads):

Everything You Need to Know About Diabetes Symptoms

In fact, some people can have diabetes for years before diabetes symptoms develop! On the next page, you can find a detailed description of each of the symptoms of diabetes.

Symptoms of diabetes may include:

The Symptoms of Diabetes

When your blood sugar levels begin to get very high, glucose is pulled from the tissues of your body. Because your tissues are left depleted, you become thirsty, so naturally, you quench your thirst with liquids.

As you drink more and more liquids, you also urinate more and more. Although you are continually drinking, your fluids don’t reach your tissues because you are urinating the liquids, so you run the risk of dehydration.

What’s more – your blood sugar levels are so high that you are actually urinating excess glucose. This excess glucose in your urine can increase your risk for urinary tract infections and yeast infections.

As you continually urinate and become dehydrated, your cells are becoming deprived of energy.

Although your body may continually produce insulin, your blood sugar level continues to rise because the glucose can’t reach the cells, so the cells can’t bring your tissues energy. Thus you become increasingly fatigued.

You may begin to notice that your pants are becoming much looser and the number is going down – quickly!

You’re probably puzzled – after all, you’re eating more than ever before, you’re so tired that you haven’t been exercising, and you’re so thirsty that you’re drinking anything in sight, even if its caloric beverages (Mountain Dew, anyone?)

So, what gives? Well, because your body can’t metabolize glucose for energy, it will begin to break down alternative stores in the body (namely, your fat and muscle stores). That glucose that is excreted in the urine? That also burns calories as well. You’re a calorie-burning machine – but not in the “healthy” way that you’d like!

Your vision may change – dramatically. In fact, it may get so bad that you’ll head to the optometrist, convinced that you need a new prescription for your glasses.

However, elevated blood sugar can affect your vision too! When your blood sugar is running high, fluid is even pulled from your eyes, making it difficult to focus – thus changing your vision. If you’re planning on getting new glasses, pick up a cheap pair because this is temporary.

Acanthosis nigricans is a classic sign of insulin resistance.

Acanthosis nigricans is a skin condition that develops on the most frequently on the back of the neck, the armpits, and the groin. It is characterized by dark, velvety discolorations that appear gradually; they may also be itchy and have an odor.

As discussed, acanthosis nigricans is most often caused by insulin resistance – a hallmark sign of diabetes. However, it can also occur as a result of certain hormonal disorders, such as ovarian cysts, hypothyroidism, and issues with the adrenal gland, certain types of cancers, such as lymphoma or tumors of the stomach, color, or liver, or as a result of certain medications, such as niacin, prednisone, and certain birth control pills.

Even when acanthosis nigricans is not a result of diabetes, having this skin condition can increase the likelihood of developing diabetes.

Slow-healing wounds are typically a later symptom, but some people who ignore their symptoms, who do not seek treatment, or who are not compliant with their medication regimen may notice this symptom. Chronic high blood sugar levels can impact your ability to heal.

Well, when you cut yourself, your body begins a three-stage process in order to repair the wound. First, an immune response occurs so as to prevent infection at the site. Then, new cells form a scab over the wound. Eventually, scar tissue forms over the wound, which finishes the healing process.

Many things factor in to the healing process. For everyone, a severe wound can mean that the wound will take longer to heal.

However, there are several groups of people who are prone to slower wound healing:

If you have diabetes and your blood glucose levels are elevated – especially for long periods of time – your wound healing can be impaired because it can lead to neuropathy (discussed later) and impaired circulation, both of which are vital for wound healing.

Some people notice this symptom initially, which is what prompts them to visit their physician. This may lead them to their diabetes diagnosis.

It is worthwhile to mention the complications of diabetes as well.

Occasionally people do not seek treatment for their symptoms, even when their symptoms become distressing; this can lead to scary complications – like diabetic ketoacidosis.

This is why it is important to know not only the symptoms of diabetes but also the complications of diabetes.

Nephropathy is when diabetes damages the kidneys. When blood sugar levels run high for too long, the kidneys filter too much blood, which is tough on the kidneys.

So, does someone with prehypertension or hypertension automatically need to take medication if they have diabetes?

According to the American Diabetes Association, people with diabetes should be treated to a diastolic blood pressure of less than 80. Those with prehypertension should be given “…lifestyle/behavioral therapy alone for a maximum of 3 months and then, if targets are not achieved, should also be treated pharmacologically.”

Those with hypertension should be prescribed pharmacologic therapy in addition to lifestyle/behavioral therapy.

The medications prescribed to treat hypertension are beyond the scope of this article, but evidence suggests that often, multiple medications are often required to reduce blood pressure levels to normal.

Gastroparesis is when the stomach takes too long to empty. The vagus nerve controls the movement of the food through the stomach, and when blood sugar levels remain elevated, the vagus nerve can suffer from neuropathy, just like other nerves of the body. This results in gastroparesis.

Symptoms of gastroparesis include:

Your chance is even higher if you’ve already had a stroke or a transient ischemic attack (a TIA), have a family history of strokes or TIAs, and you have heart disease, have hypertension, have elevated cholesterol, are overweight or are obese, or are a smoker.

Because a stroke is life-threatening, you should know the warning signs; if you note these signs, call 911 immediately:

Neuropathy is when your chronic high blood sugar levels lead to nerve damage. This nerve damage can cause an inability to feel pain, sense temperature extremes, and can cause neuropathic pain.

As we previously discussed, are the result of poor wound healing. They are most likely to occur on the ball of the foot or on the bottom of the big toe. Foot ulcers are notoriously hard to heal, especially if your blood sugar levels are not under good control.

This is why it is imperative as a person with diabetes to take care of your feet with a proper diabetic foot care regiment.

This list of complications is in no way exhaustive but gives you an idea of some of the complications that are possible with diabetes.

If you note any of the diabetes symptoms mentioned above, make an appointment with your physician immediately. Prompt diagnosis of diabetes is important. You can reduce your risk of developing complications by controlling your blood sugar levels.