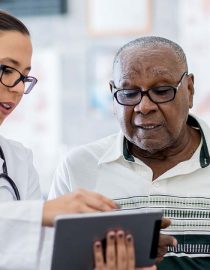 As a certified diabetes educator (CDE), I often am called to see people in the acute inpatient setting. On certain occasions, I am called to ICU to see a newly diagnosed patient. They may have presented with diabetic ketoacidosis (DKA). This is much more common in patients with type 1 diabetes who are either newly diagnosed, are ill, or have had a complication with their insulin management.

It is possible for someone with type 2 diabetes to present with DKA, but it much more likely for them to present with a different condition if their blood glucose levels become acutely elevated.

What Is Hyperosmolar Hyperglycemic Nonketotic Syndrome?

HHNS is a serious medical condition caused by blood glucose levels that are dangerously high. An illness or infection typically triggers it. Often (but not always!) it occurs in people with type 2 diabetes and in those who have been undiagnosed.

The symptoms of HHNS may take several days or even weeks to develop. These symptoms include:

As you can see, HHNS can be fatal if left untreated.

Causes and Risk Factors of HHNS

So, what is most likely to bring about HHNS? After all, not everyone who develops type 2 diabetes goes on to develop blood glucose levels of 800 mg/dl and earns an admission to ICU, right?

Causes and risk factors for HHNS include:

Immediate treatment of HHNS will involve intravenous fluids to replace fluids that have been lost and to counter dehydration, intravenous potassium and sodium phosphate, as it is likely that your electrolytes are out of balance – this will ensure that your cells are functioning properly – and intravenous insulin to reduce your blood glucose levels.

This is when you must begin to learn how to manage your blood glucose levels in preparation to live with your disease at home. This will likely mean learning about things:

You might also like...Nine Common Insulin Mistakes You Need to Avoid Making

Often this education begins in the hospital but is continued on an outpatient basis. Why? Because learning about a new condition can be overwhelming!

When I see a patient newly diagnosed with type 2 diabetes, I attempt to set them up for a follow-up appointment with a CDE after hospital discharge – and guess what? Much of the information that was learned in the hospital has been forgotten or skewed because of the stress of hospitalization.

How can you avoid HHNS?

15 Healthy Tips for Living With Diabetes

Since the condition affects your entire body, living with diabetes requires more than eating well and keeping your blood sugar within a healthy range.
by Afra Willmore and Patricia Bratianu on February 14, 2017
Advertisement
Click here to see comments
See Also

You might also like...Understand Your Risk for Diabetes Comorbidities

We are building our Diabetes community.