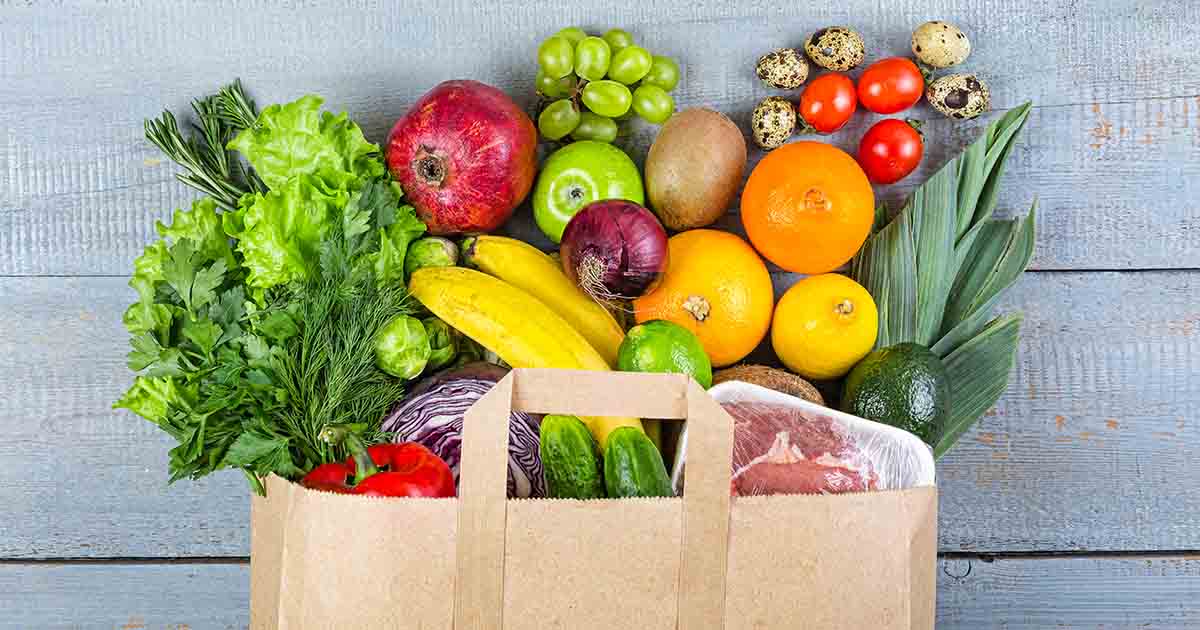 The Basics of a Healthy Diabetic Diet

When people are diagnosed with diabetes, one of the first questions they have is about food. Managing symptoms of diabetes is important for lifelong treatment.

As a certified diabetes educator, I often meet with people after they are initially diagnosed with diabetes. They often ask me, "What am I going to eat?” Understandably so – there is a certain stigma associated with diabetes, and it portrays the picture that people with diabetes can only eat certain foods. And this can be pretty scary.

First of all, please note that the information below is general information pertaining to a diabetic diet. It does not replace a personalized meal plan that would be created by a registered dietitian (RD). An RD would be able to create a meal plan that would take into consideration multiple different factors, such as your glucose levels, lipid levels, body weight, blood pressure, and other comorbid conditions.

What Can I Eat if I Have Diabetes?

Let’s get this straight, folks – you can still eat whatever you want.

However, you can’t necessarily eat whatever you want, whenever you want, nor should you eat it in the portion sizes that you previously did before.

“What is this crazy lady saying?” you may be thinking. “I was just diagnosed with type 2 diabetes. She has no clue what she’s talking about!”

Hear me out, people.

When you make that appointment with the RD, as we discussed before, she is going to discuss carbohydrate counting. And you’re going to find out that carbohydrates increase your blood glucose levels. Carbohydrates are found in a variety of different foods, such as milk, fruit, potatoes, bread, and desserts.

Each person with diabetes has a recommended amount of carbohydrates per meal and snack that they should consume for glucose control as well as weight loss and/or weight maintenance. Sure – the best way to “spend” this carbohydrate allotment is on healthy choices, such as a slice of whole grain bread, a serving of rice, or an apple.

But every now and then, if you are craving a can of Coke, a Whopper, or a piece of cake – it is ok. The portion sizes matters – as does the timing of the food. Why? Because of the amount that you are consuming – you have a certain amount of carbohydrates that you should be consuming.

So, maybe that Whopper you’re craving isn’t the best choice for a snack, but if you can wait for dinner to have that indulgence, it would be better for your glucose levels. And hey – pair it with a salad!

According to EatingWell, “Desserts may seem off-limits since many are high in sugar, but remember that for people with diabetes the total number of carbohydrates of a meal or snack matters more than the total sugar. That means dessert can still fit into your diet—with a few adjustments.” This logic can apply to other foods that you love as well.

So, before we move any further in our discussion, just know that there are undoubtedly changes in your diet that you will make and should make in order to achieve adequate glycemic control, but there will be no foods that are “off-limits” completely.

What Foods are Good for People with Diabetes?

If you’re reading between the lines here, you can probably ascertain that certain foods are better for you than others – whether you have type 2 diabetes or not. Yes, I did just get done telling you that you can still have that Coke or Whopper every now and then – but that doesn’t mean that I’m not going to tell you that daily, you shouldn’t eat a healthy diet.

So, what foods are considered “healthy” for people with diabetes?

According to Diabetic Living, several foods are known to be beneficial for people with diabetes.

Asparagus is considered a diabetic super food for several reasons. A 2012 research study indicated that consuming asparagus may reduce blood glucose levels as well as increase the body’s own insulin production. In addition, asparagus is rich in folic acid. A diet rich in folic acid helps to lower homocysteine levels, which can reduce the risk for coronary artery disease.

How about those avocados? Who hasn’t been eating avocados these days? A 2008 study indicated that women who consumed avocados, which are rich in monounsaturated fats, were 25 percent less likely to develop type 2 diabetes than their counterparts who did not consume avocados.

You’ve probably heard that fiber is good for blood glucose control, so it may come as no shock to you that beans are a great food for people with diabetes. A 2012 study indicated that eating one cup of beans daily reduced both blood glucose levels and blood pressure.

Flaxseed is beneficial for anyone for a variety of reasons. It contains three grams of fiber per tablespoon. It contains lignans, which is an antioxidant that prevents heart disease and cancer. It contains alpha-linolenic acid (ALA), which has a similar benefit to omega-3 fatty acids that is found in fish. And the research for the benefit for type 2 diabetes is profound:

Foods to Avoid for People with Diabetes

I never want to tell people to stop eating certain foods with diabetes specifically, but some foods can be reduced.

For example, you walk into a coffee shop and you peruse the menu. “Ahhh,” you think. “An iced mocha Frappuccino with extra whipped cream. Make that a large.” (Side note – I’m not even sure that’s a real drink.” You walk out of the coffee shop, sipping your beverage, thinking nothing of it.

Therein lies the problem – you are drinking your carbohydrates.

Every time you order a regular soda, down a glass of milk or juice, or pick up a coffee shop specialty item, you’re taking in an exorbitant amount of carbohydrates that you could be eating instead.

And what about a store-bought smoothie? You may be thinking you’re ordering a healthy option. However, a store-bought smoothie may have a high amount of carbohydrates compared to a smoothie you could make at home. Why? The barista could be adding sugar to the smoothie. In addition, the portion size is probably much larger than the serving size that you’d make at home.

How about those trans fats, people? We should all be avoiding trans fats, but they are especially harmful to people with type 2 diabetes.

They don’t directly raise blood glucose levels, but they do increase inflammation, which in turn increases lipid levels – and lipid levels are known to increase with type 2 diabetes already.

So, avoid foods that contain trans fats, such as creamers, cookies, and margarines.

Cereals – especially sweetened cereals – aren’t inherently bad. However, they are carbohydrate-dense. Then, you’re typically adding milk, and possibly even fruit. What is seemingly a healthy breakfast can turn into a breakfast that is going to skyrocket your blood glucose levels!

Dried fruit may seem like a healthy option (and it isn’t terrible!) but it can get you into trouble. Why? When the water is removed from the fruit, it becomes concentrated, and you’re more likely to eat much more of that fruit to become satiated. Instead of eating raisins, eat the grapes instead – you’ll probably end up eating less!

Top Fruits for People with Diabetes

A common misconception that I often hear is that people with diabetes should load up on fruit. Why? Because it is chock-full of vitamins and minerals, fiber, and it is better for you than sugary treats. All true.

That being said, there are several fruits that have been researched heavily by scientists and may be more beneficial for people with diabetes. Below are just some examples of the best fruits for diabetics to eat.

According to a 2012 study performed by Ohio State University, eating an apple daily may reduce LDL cholesterol by as much as 40 percent – a boon for people with diabetes.

Also, the Harvard School of Public Health studied the diets of approximately 200,000 and found that those who ate five or more apples per week were less likely to develop type 2 diabetes.

Grapefruit is a nutrient powerhouse. It is packed full of antioxidants – and it is thought to reduce cholesterol levels, which is extremely helpful to people with diabetes.

One study researched 57 people with heart disease for 30 days, and found that those who consumed a ruby red grapefruit daily “decreased their LDL (bad) cholesterol by 20 percent and triglycerides by 17 percent. In contrast, those who ate a white grapefruit reduced LDL by 10 percent with no significant change in triglycerides compared with a group who didn't eat the fruit.”

A word of caution about grapefruit – it can interact with many different medications, so please discuss with your physician or pharmacist before consuming regularly.

Blueberries are rich in flavonoids, which are known to be helpful for heart health. They are also rich in fiber, which “may reduce the risk of diabetes and cognitive decline, and help keep blood sugar more level.”

Other studies also indicate that the anthocyanins, which give blueberries their color, may reduce the risk of developing type 2 diabetes.

Fruits and Vegetables to Avoid for People with Diabetes

It is a commonly held misconception that there are certain fruits that you should not consume if you have type 2 diabetes. I often have patients walk into my office and say, “I have heard that I can’t eat bananas with diabetes anymore. I love bananas! And what about grapes?”

This is completely false. Like I have said before, there are no foods that are off the table entirely.

According to M. Regina Castro, MD, a Mayo Clinic physician, “Some fruits do contain more sugar than others, but that doesn't mean you shouldn't eat them if you have diabetes. The total amount of carbohydrates in a food affects blood sugar levels more than does the source of carbohydrates or whether the source is a starch or sugar. One serving of fruit should contain 15 grams of carbohydrates. The size of the serving depends on the carbohydrate content of the fruit."

With this logic in mind, there are no fruits that are off-limits – even that dreaded banana! The serving size may be a bit different. For example, 15 grams of a medium banana may only be about half, whereas 15 grams of clementines is two pieces of fruit. Here are several examples of a serving of fruit:

And what about vegetables? Vegetables do have carbohydrates in them – but they are minimal.

There are several vegetables that are rich in carbohydrates and they need to be “counted” if you are counting carbohydrates. For example, potatoes, corn, peas, and certain squashes are all starchy vegetables.

Does that mean that you should completely avoid them? Absolutely not – as with all other carbohydrate foods, you must learn how to balance them into your diabetic diet.