Looking at the Pros and the Cons of Insulin Pens 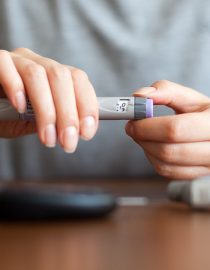 Diabetes Pen vs. Syringe and Vial

If you’re a long-time vial and syringe user, switching to an insulin pen can be a scary thought.

As a certified diabetes educator (CDE,) I’ve worked with many patients who come up with all kinds of crazy reasons why they don’t want to switch to an insulin pen.

While some have had valid reasons (for example, their insurance doesn’t cover it,) most haven’t tried the pens.

When they tried the pens – they were shocked to find that it was so much easier.

First, I’ve got two reasons why may want to stick with a vial and syringe. Second, I’ve got a couple of reasons why you should give insulin pens a shot!

The Cons of Using A Diabetes Pen

Your Insurance Prefers Vials over Pens

Unfortunately, our insurance plans often dictate what medications we take, even when we, as providers, really know what is best for our patients.

For example, while you may be on a once-daily insulin, such as Lantus or Levemir, which is available in both pens and vials, your insurance may only cover it in a vial.

This means that, unless we can think of a perfect reason to get it changed the prescription to a pen through the use of prior authorization, you’re stuck with your insulin in a vial.

This is listed as a “con” because if I were to recommend to your physician to change your prescription to a Lantus pen.

For example, you’d walk away from the pharmacy with a several hundred dollar copays. In this instance, I’d recommend going with the vial and syringe every time – unfortunately, the insulin pen, at this time, wouldn’t be for you.

You Are on Large Doses of Insulin

An insulin pen has the capability to give 80 units of insulin at a time. If you need to give yourself more than 80 units per dose, well guess what?

This could happen for someone who needs, for example, 100 units of Lantus nightly. This person would need to split their dose into two doses. If that person had a Lantus vial and syringe, they could have a 100 unit syringe and give just one dose.

However, if their dose is larger than 100 units, it’s a moot point – the leading maker of insulin syringes, BD Diabetes Healthcare, makes syringes in three different volumes with varying different needle gauges and needle lengths.

The volumes are 30 units, 50 units, and 100 units – meaning that if you are on a dose larger than 100 units, you’ll still need to give multiple units of insulin.

This is listed as a “con” because if I were to recommend to your physician to change your prescription to a Lantus pen and you are on 95 units daily, you’d be giving yourself two injections per day – or, like many of the patients I see, you’d omit the last 15 units and give only 80 units per day (bad idea!); for you, a vial may still be a better choice.

You might also like...Can a Thin Person Get Type 2 Diabetes?

The Pros of A Diabetes Pen Injections

Drawing insulin out of a vial takes practice. What’s more, if you have vision issues, it can be dangerous.

Why? People with vision problems try to draw insulin out of their vial and can’t see those tiny little lines on their syringe, they could mistakenly give themselves the wrong dosage.

This presents a dangerous condition called diabetic ketoacidosis, which is caused by too little or an absence of insulin, or hypoglycemia (low blood sugar.)

Although I try to explain that skipping insulin can be dangerous, I can understand where they’re coming from.

Pulling the vial from their purse, drawing up a dose and administering where people can see takes work.

Whereas a diabetes pen just requires dialing the dose to the required amount of units and administering it – a much more discrete process.

What’s the most important thing about insulin? That you take it – regardless of whether it is in a vial or syringe!

We are building our Diabetes community.